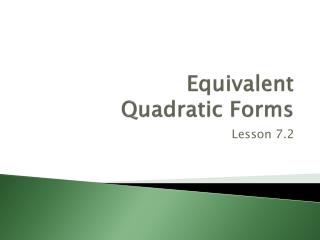 Equivalent Quadratic Forms - . lesson 7.2. in lesson 7.1, you were introduced to polynomial functions, including

Equivalent Forms of Rational Numbers - Write the batting average as a fraction. divide the numerator by the denominator.

Three forms of quadratic function - . standard form. f(x)= ax^2+bx+c a tells you whether the graph opens up or down, and