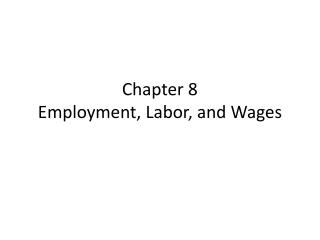 Chapter 8 Employment, Labor and Wages - . the labor movement. the study of labor is part of macroeconomics or the branch

Labor and Wages - . in this lesson, students will be able to identify the impact of education on wages and the impact of

Labor and Wages - . chapter 9. what is a union?. unions – an organization that represents employees’ interests to

Employment and Wages - . what determines wages? reference 8.1. key questions to answer. why do some people earn higher

WAGES in labor - . wages. the price of labor payments workers receive in return for work governed by the forces of supply

Wages &amp; Employment - . 2182gg. employing some one. two types of employment a direct employee or subcontractor

Employment, Wages &amp; Taxes - . macroeconomics. the study of the economy as a whole government decisions about the