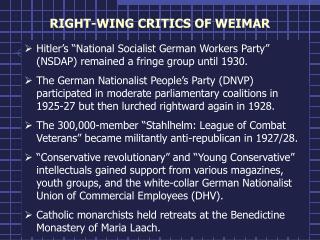 Those on the right wing of politics: - . want to keep society very stable. want a strong government dominated by a strong

Evolution’s Critics - . chapter 17. argument #1. evolution if not solidly demonstrated. “evolution is just a

Economic Systems and Right Wing Dictatorships - . economic systems. use page 91 in your world geography textbook to

Home Critics - . home critics ?. it provides movie reviews , possibility make your own reviews and share with your

Weimar Germany - . aim: to revise key details about the first half of the german depth study. a revision presentation

Weimar Germany - . democracy on trial. first…. before we talk about weimar germany it is important to know how germany

Weimar Germany - . really good website on weimar germany: i would suggest using it combined with the powerpoint to create