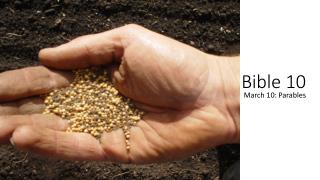 Bible 10. March 10: Parables. Outline Help Schedule Sign-up. Tuesday and Wednesday at lunch or after school. Discussing the intangible…. Love?. What is love? Why are there so many songs, stories, and poems about love? Can love be fully understood or communicated without song/story/poetry? Bible 10: Triumphal Entry - . take out your smart devices and open up to quizup to check progress you may play a round in