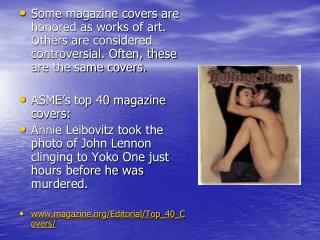 Some magazine covers are honored as works of art. Others are considered controversial. Often, these are the same covers. ASME’s top 40 magazine covers: Annie Leibovitz took the photo of John Lennon clinging to Yoko One just hours before he was murdered. www.magazine.org/Editorial/Top_40_Covers/. Fair Vs. Equal - . fair vs. equal defined. equal -everyone gets the same. in education equal would eliminate any