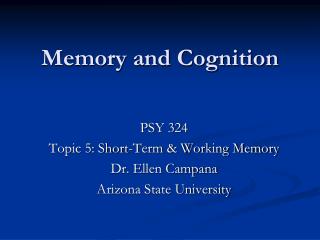 Memory and Cognition - Memory and behavior theory. organisms must often change their behavior to adjust to changing

Memory and Cognition - . retrieving memories and the failure of memory. memory videos. cards:

Memory and Cognition - . intro to memory/cognition and forming memories. memory. any system that encodes, stores, and

Cognition: Memory - . cs352. cognition. what goes on in our heads when we carry out activities (eg, use uis)? book:

Memory, Cognition, and Language - . test review. because it has all of the features commonly associated with the concept

Memory &amp; Cognition - . memory. learning that has persisted over time information that can be retrieved. 3 key

MEMORY &amp; COGNITION - . let’s see what you can remember…. all mental activities involved in thinking,