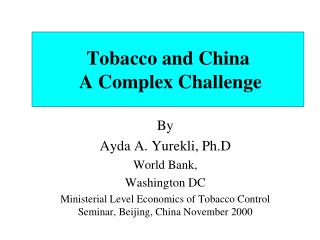 LGBT Tobacco Surveillance: the challenge and successes - . author. scout, ph.d . - scout is currently the director of the

China: Opportunity or Challenge - . felaban 2012 lima, perú. china and latin america. from being an ocean apart to

The Challenge of Complex Governance - . oecd/japan seminar ”schooling for tomorrow”: “futures thinking for

The Irregular Challenge: A comprehensive approach to a complex problem - . norge i mne 6 3 overliggende mål med

A Smoker and His Tobacco - Most tobacco products indicate the body of their blends on the packs or labels. the

A Command and a Challenge - . be steadfast, immovable, always abounding in the work of the lord. 1 cor 15:58. early

Modeling and Simulation Methodology: The Challenge of Complex Endeavors - Ai and computing in countering terrorism