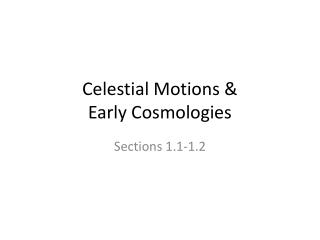 Celestial Motions & Early Cosmologies. Sections 1.1-1.2. Reminders. Reading quiz for Chapter 1, Sections 3 and 4, due on Mallard prior to start of next class. Weekly reflection #1 will be sent via email later today and will be due via email prior to start of class on Tuesday. Introducing Early Civilizations - . early civilizations. after agriculture, the next step in setting our framework for

Early Civilizations - . early humans what we know about the earliest people comes from the things they left behind.

Chapter S1 Celestial Timekeeping and Navigation - . s1.1 astronomical time periods. our goals for learning:. how do we

THE AGRICULTURAL REVOLUTION and The EARLY AGRARIAN ERA - . middle school workshops session 3 craig benjamin. what is