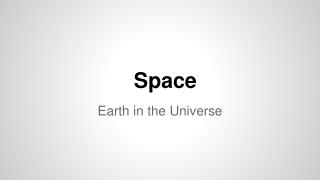 Pictures of the year: Space - Pictures of space. picture showing characteristics of

Access Control - . name space management. classes written so far all belong to a single name space: a unique name has to

Methods of gaining space in the permanent dentition Types of clinical cases in Orthodontics: 1 Definite extraction

Space Elevator - . chris biedrzycki ned cameron mike gruener erick haro. what is a space elevator?. what is a carbon