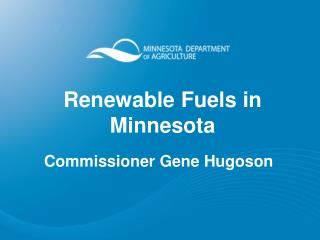 Renewable Fuels Association - . “the voice of the ethanol industry” for over 25 years biofuel standardization july

Non-renewable Energy Fuels - . non-renewables. at our current rates of consumption, we will use up the resource oil

Renewable Energy in Minnesota -- How Much Do We Need? - . louis schwartzkopf --minnesota state mankato --se/sc clean