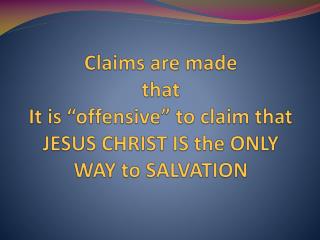 Claims are made that It is “offensive” to claim that JESUS CHRIST IS the ONLY WAY to SALVATION. AS EVANGELISTS WE OUGHT TO BE READY TO ANSWER EVERYONE ABOUT THE REASON FOR THE HOPE THAT IS INSIDE US … AND in order to answer this question we need to have a close look at …. Jesus Christ Is Risen - This is the day christians all over the world celebrate the resurrection of jesus christ! if

Jesus Is the Only Savior - . november 2. think about it …. here is our town … there are people in our town and

Jesus Christ Is Lord - . jesus is lord over all!. acts 2:33 &quot;therefore being exalted to the right hand of god ,

Who Is Jesus Christ? - . confirmed in the faith series b lesson 4. christ’s person (who he is). 1a. he is called god.

Proclaim it to the world, Jesus Christ is Born - . purpose. to teach about the birth of the savior and how both the bible

Is Jesus the Only Way to God? - . particularism and pluralism. biblical claims salvation only through jesus. acts 4:12 -

Is Jesus the Only Way? - . sue bohlin probe ministries www.probe.org. 3 options. christianity is not narrow christianity

JESUS is the CHRIST - . psalms

Salvation with Jesus Christ - . things we receive at salvation–the son. washed us from our sins in his own blood (1

Jesus is the Christ - . “whosoever believeth that jesus is the christ is born of god: and every one that loveth him

The Holy Eucharist is the gift that Jesus Christ makes of himself, - Sacramentum caritatis the sacrament of charity