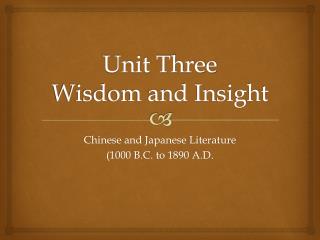 Unit 8 Knowledge And Wisdom - . pre-reading questions. how do you define &quot;wisdom?&quot; for your own part

Unit Three - . de-creation. alienation from self. first tragic effect of sin a loss of one’s inner harmony and peace

Unit Three - . communication by phone. unit goals what you should learn to do: making a phone call answering the phone

UNIT THREE - . the church is the people of god. 3.2 who is catholic?. did lynn leave the church?. lynn wasn’t

Unit Three - . the generation gap. quotations about fatherhood:. few things are more satisfying than seeing your own

Unit Three - . 7. kid with a knife (part i). information related to the text punk a rough and unpleasant young man or