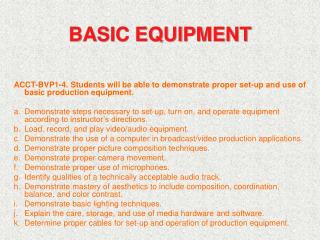 BASIC EQUIPMENT. ACCT-BVP1-4. Students will be able to demonstrate proper set-up and use of basic production equipment. Demonstrate steps necessary to set-up, turn on, and operate equipment according to instructor’s directions. Load, record, and play video/audio equipment. Basic Sewing Equipment - . what are notions?. items used to make an outfit such as buttons zippers thread hook and eye,

Basic Kitchen Equipment - . their uses and storage areas ** use this presentation to help you complete your equipment

Basic Kayak Equipment Online - Our orders, kayak equipment is highly customized according to the need of our

Basic Tool Safety and Equipment - . learning targets. i can explain safety skills used in agricultural mechanics. i can

Basic equipment for the use of Physical Therapists - . jessica sun.