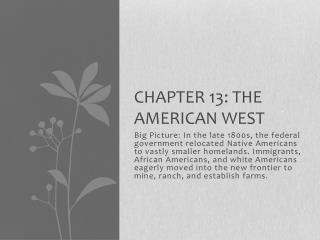 The American West An Overview: 1860-1900 - . practice essay “the american west was a land of opportunity for americans

Jedediah Strong Smith - Facts about jedediah. he was the first american (after the astorians) to cross west over the

AMERICAN HISTORY CHAPTER 4-4 - . an american victory. revolutionary battles in the west and south. war in the west

Chapter 1 - The Americas, West Africa, and Europe - . on the eve of their interaction, native american, west african,

Chapter 13: Settling the West - . american history. growth of the mining industry. discoveries of gold, silver, and

Manifest Destiny and the American West - . the american west. the student is expected to know ( desired outcomes ): what

China and the West: A Fascinating Chapter in the 19th Century - . san-pao li, ph.d. department of asian and asian

As American settlers moved west, they took over Native American lands. - Also during this period, tens of thousands of