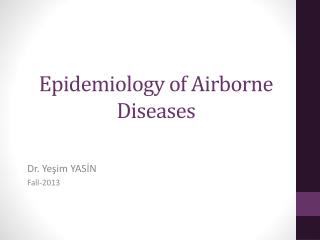 P3G: an international consortium in Human Genome Epidemiology - . ultimate goals: for the understanding of

EPIDEMIOLOGY OF CORONARY HEART DISEASES(CHD) - . the salient epidemiological observations about chds are :. large

Airborne Pathogens except TB - . brainstorm. how do you prevent an airborne disease?. protect your self, protect your

Airborne Internet - . definition. proposed network in which all nodes would be located in aircraft. used in the

Epidemiology - . epidemiology is the study of the distribution and determinants of health-related states or events

Final Rule to Protect Workers from Beryllium Exposure - . disclaimer. you should not construe any statements or