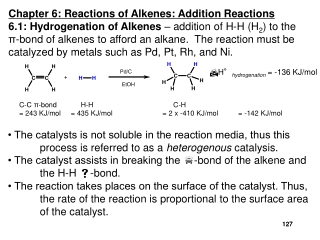 Chapter 6: Reactions of Alkenes: Addition Reactions 6.1: Hydrogenation of Alkenes – addition of H-H (H 2 ) to the π-bond of alkenes to afford an alkane. The reaction must be catalyzed by metals such as Pd, Pt, Rh, and Ni.  H° hydrogenation = -136 KJ/mol. Lesson 127 - . remember his rescue. 3 nephi 18. “some time ago there was an interesting article about mountain climbing

Sosc 127 - . rendering :sending suspected terrorists to other countries to be tortured