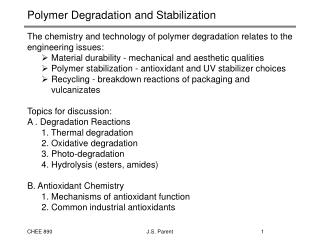 Polymer Degradation and Stabilization - . the chemistry and technology of polymer degradation relates to the engineering

CORROSION AND DEGRADATION - . issues to address. • why does corrosion occur ?. • what metals are most likely to

“Degradation” - . goals: to start thinking mechanistically about what controls degradation (and thus preservation) of

Pollution and Degradation - . …of the lithosphere, hydrosphere and atmosphere. our farming practices have changed:.

Degradation and Protection - . what is affecting the materials ?. definitions. degradation occurs when a material looses

Stabilization - . data base inputs. various inputs that will answer the question are required standard protocols