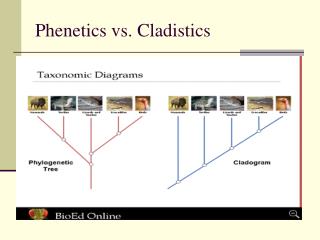 Phenetics vs. Cladistics. Phenetics. The study of relationships among a group of organisms on the basis of the degree of similarity between them, be that similarity molecular, phenotypic, or anatomical. Cladistics - . determining relatedness and forming theories. what it is….what it isn’t. evolutionary systematics

Cladistics - . phylogeny. study of evolutionary relationships. cladistics. a method that applies the scientific method to

Cladistics (Ch. 22) - . based on phylogenetics – an inferred reconstruction of evolutionary history. goals of

DIVERSITY OF EARTHS ORGANISMS AND CLADISTICS - Introduction . one of the goals of science is to recognize patterns and

Cladistics and Cladograms pp. 341-345 - Warm up 6/6 make a venn diagram comparing and contrasting protists and fungi 4

Phylogenies &amp; Classifying species (AKA Cladistics &amp; Taxonomy) - . what are phylogenies? how do we read

What is the difference between Phylogeny, Cladistics , and Taxonomy? - . taxonomy is the biological science that deals

Why is teaching taxonomy &amp; cladistics so difficult? - . -the problems -the old way -the proposed new ways. the

iPhone vs. the Ocean vs. Upstage vs.… - . ctia wireless 2007: iphone casts shadow over competition. main goal of