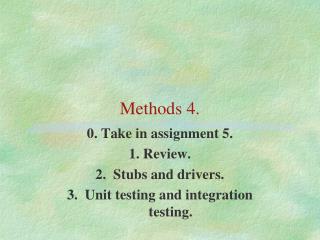 4. Statements and Methods - . objectives. “with regards to programming statements and methods, c# offers what you would

4 – Exponential Smoothing Methods - . signal and noise. smoothing can be seen as a technique to separate the signal and

Chapter 4 – Research Methods - . different methods to answer different questions a. does one factor cause another?