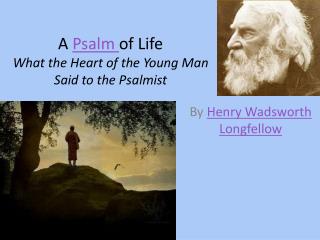 A Psalm of Life What the Heart of the Young Man Said to the Psalmist. By Henry Wadsworth Longfellow. The Title of the Poem. Psalm 9 I will give thanks to the LORD with my whole heart; - I will recount all of your wonderful deeds. i will be glad

Psalm 22 - . an illustrative lesson from life science. psalm 22 . no other psalm describes the crucifixion of christ in

d esire of the heart - . psalm 37:4 “delight thyself also in the lord ;. and he shall give thee the desires of thine

God is Good IF … A Journey Into Malcontent Psalm 73 By Wes Woodell Lake Merced Church of Christ - San francisco, ca

A psalm of life - . aric, amber, westley, destiny, and charntol. key terms and definitions. life – in our poem the