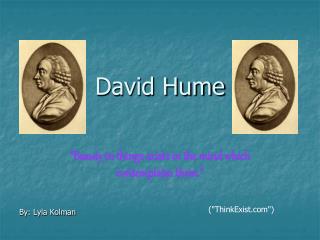 David Hume. By: Lyla Kolman. “Beauty in things exists in the mind which contemplates them.”. ("ThinkExist.com"). Stats. British Empiricist Believed that the only true knowledge was gained by experience, sometimes just by the senses. (“Free Dictionary”) Influential during his lifetime