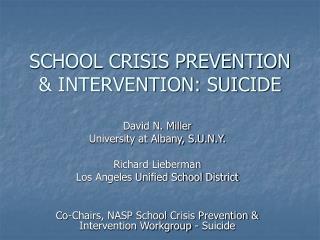 SAVING LIVES: Understanding Depression And Suicide In The Elderly - . sponsored by the ohio department of mental health

CHILDHOOD CKD PREVENTION PROGRAM IN TAIWAN: WHAT ARE WE GOING TO DO? - . you-lin tain md, phd, chang gung memorial

Response to Intervention(RT) What is it and What is our Role? - . deborah adamczyk dixon, ma, ccc-slp director of school

Suicide - . chapter 10. suicide. suicide is a leading cause of death in the world there are about 700,000 people who die

Problem-Solving and Response to Intervention: Implications for State and District Policies and Practices - . c.a.s.e.