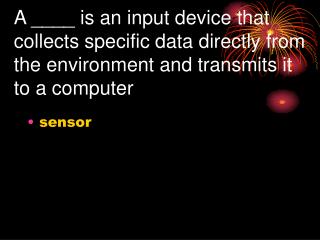 A ____ is an input device that collects specific data directly from the environment and transmits it to a computer. sensor. What is the definition of a softcopy?. data in electronic form. An output device must be used in order to view a softcopy. Printed output is referred to as a (an):. What is an input device? - . the input device is used to enter data and give instruction to the computer. e.g keyboard,

WHAT IS AN INPUT DEVICE? - . input devices. enters data or instructions into a computer converts data into a form which

An Introduction to Electrostatic Actuator a Device Overview and a Specific Applications - . prepared by: eng. ashraf

A. Buy mackerel directly from the fisherman who caught it - 1. several customers were diagnosed with scombroid poisoning

New GuardTek Feature: Send a Message Directly To Device - Simply log into guardtek from your laptop or pc, select the

How to Buy a Home Directly from the Owner - Are you thinking of property for sale? we offer you the best advertising

What is inside a personal computer that makes it go? - . csueb ted 5110 – team 8 l stevens. the motherboard holds most.

A computer is a device that you can use to store, manipulate, and display text, numbers, images, and sounds. - A computer