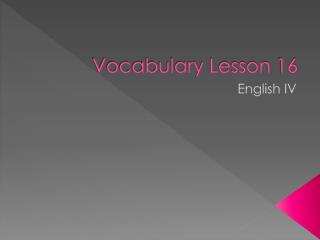 Vocabulary Lesson 16 - . tender . something, like food, that is tender is soft and easy to chew or cut. what would it be

Vocabulary lesson 16 - . add the notes to your spiral. . versatile. adjective: changing easily or having many good uses

Vocabulary Lesson 16 - . abound. biographies and stories about mohammad (known as the prophet) abound . these many books

Lesson 16 Robust Vocabulary - . what would be more charming , a monkey that pops out of a box when music is played or a

Vocabulary Lesson #16 Definitions - . english 1. atrophy. verb to waste away or fail to develop. paralysis of a

Lesson 16 The School Story Vocabulary - . tempted. if you are tempted to do something, you really want to do it, even

Vocabulary Lesson - . mythology. homework. use only blue or black ink or regular pencil. fold left side of paper 2.5

Vocabulary 16 - . using context clues. abyss. bottomless gulf; anything too deep to measure. agenda. a list or program of

Lesson 16 - . how does god want us to keep his gifts of sex and marriage pure?. how do some married people ruin god’s

Lesson 16 - . by: charlesv , gabo, kevin. entente. entente - an agreement or understanding between two or more political

LESSON 16 - . overview of previous lesson(s). over view. in computing, a visual programming language (vpl) is any