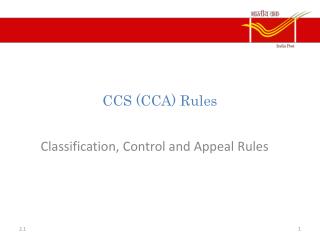 CCS (CCA) Rules. Classification, Control and Appeal Rules. Constitutional Provision. These Rules are framed in exercise of the powers conferred by proviso to Article 309 and Clause (5) of Article 148 of the Constitution. Rule 2. INTERPRETATION. CCS - . providing pathways to the future. ccs. ccs is a multi-faceted organization with interests in rocketry, aerospace,