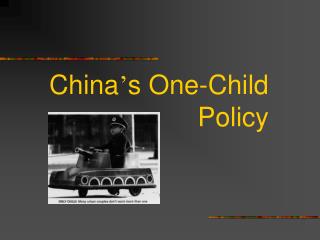 China ’ s One-Child Policy. Why Does The Policy Make Sense?. Unemployed? Employed for a short period only? Is finding work getting harder each day? Well be prepared for it to get even HARDER … because every time a child is born, there ’ s one more person out there taking YOUR job. Continued …. Stop Child Abuse - The term child abuse is very familiar. you might have heard about it or at least have understood it.

Child Labor in America - . child labor: the lucky ones. child labor was a national disgrace during the gilded age. the

Group 1: End Child Poverty - Coming together to dismantle the cradle to prison pipeline in massachusetts a half day

Child Health Surveillance - . where are we in 2011 ?. community paediatrics child health screening, surveillance,

Child Welfare Policy and Practice for Supervisors Version 2.0, 2013 - . goals for the training. in this training we will: