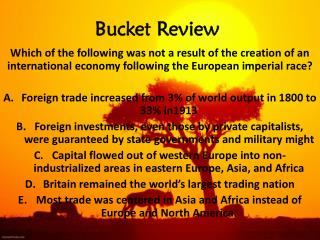 Bucket Review. Which of the following was not a result of the creation of an international economy following the European imperial race? Foreign trade increased from 3% of world output in 1800 to 33% in1913 Bucket List! - . things i want to do before i die! by: krista froome. 1. dissect a shark!. i would like to dissect a

Bucket sort - . outline. the bucket sort makes assumptions about the data being sorted consequently, we can achieve

BUCKET BANDS - . percussion and rhythm unit. what is a bucket band?. a bucket band is a group of individuals that use