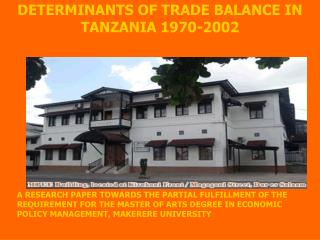 DETERMINANTS OF TRADE BALANCE IN TANZANIA 1970-2002. A RESEARCH PAPER TOWARDS THE PARTIAL FULFILLMENT OF THE REQUIREMENT FOR THE MASTER OF ARTS DEGREE IN ECONOMIC POLICY MANAGEMENT, MAKERERE UNIVERSITY. In Partial Fulfillment of the Requirement Of Education and Management of Educational Institutions - Educ 511 nenita p.

Dr. Victoria Moran A thesis submitted in the partial fulfilment of the requirement for the award of the degree of the D

A Thesis Presentation By Hermawan Haryanto In Partial Fulfillment of the Requirements for - Analysis, design and

AUTOMATION OF FIBER COMPOSITE MANUFACTURING PROCESS (In the partial fulfillment for the course of Mechatronics, ME5643)

The Master of Science Degree in Software Engineering - . school of computing and software engineering southern

The language of the research paper - . verbatim. a word for word copy of someone else's writing. if not cited this is

Research Paper: Towards a greater understanding of the causes of African poverty - @garrysimmons head of geography,

Economic Principle of the “Middle Man” - . costco (wholesale). i’m hungry!. deli (retail). therefore, what does it

For the degree Master in pharmacy in Pharmacology - Presentation on preclinical evaluation of tinospora cordifolia l .