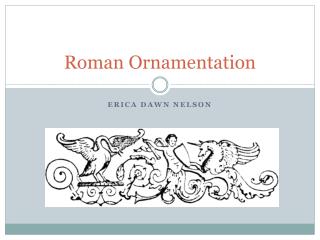 Roman Ornamentation. Erica Dawn Nelson. Differences Between Greek and Roman. Greece was a number of city states held together mainly by language, religion, and race. Ornamentation - . how important it is to an indian woman…. importance of the number 16 in india. there are 16 phases of

Any best ornamentation needs fancy fabric ribbon - This ppt provides us fine points about some beautification items. for

Roman - . adventure. rules. the decisions you make as a class will either earn or cost you points. use them wisely!

Roman Sculpture - . is there such a thing as a roman style of sculpture? romans have reputation as imitators- copied many

Roman Vocabulary - . directions: copy the definitions to your vocabulary matrix. write a sentence that shows

Byzantine and Islamic Art 476-1453 - . in 324 ad emperor constantine moved the capital of the roman empire to