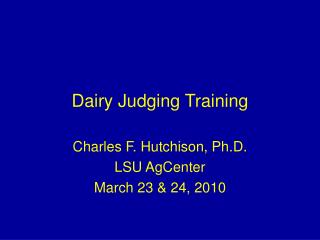 Dairy Judging Training - Objectives of training a dairy judging team . gain a better understanding of what makes a

JUDGING - Common. concepts. ? shouldn't judge anyone."?i'm not going to judge anybody."?your not the

Judging - . most misused passages in the nt :. john 3:16 for god so loved the world that he gave his only begotten son,

Judging - . matt 7:1-5. introduction. this is one of the most misinterpreted, misapplied, and misused bible verses. when

JUDGING GUIDELINES - . this is for judges and coaches at the nw parli-ie warmup. welcome to our community’s tournament.

Judging Workshop - . key member presentation. 1. 2. 3. 4. what are we going to do?. introduction group energizer “what

Judging in Europe, Judging in Asia - . gp kuala lumpur 2014. intro. what this seminar is about encourage you to try to