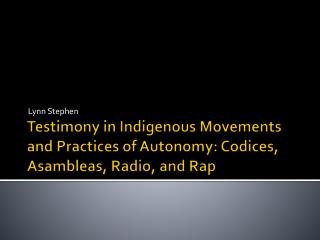 After the Violencia: Indigenous Activism - . kay warren “indigenous movements and their critics: pan mayan activism in

Outside of Social Movements: Dilemmas of indigenous handicrafts vendors in Guatemala - . walter little. the maya

Adulthood and Autonomy - . the struggle toward autonomy process of autonomy begins in early childhood and continues

Autonomy - . autonomy. ancient g reek: autonomy = „one who gives oneself their own law“ au·ton·o·my: i ndependence

How Can I Strengthen My Testimony? - . what is a testimony?. a testimony is a spiritual witness of the truth given by the

Royal Holloway, University of London, UK - Francesca ainsworth &amp; amina memon. when, where and how often? a

Testimony : - . this document was written in order to - give testimony of the total distress that a lack of understanding

Testimony: Psalms - . 48 …you rescue me from the violent man. 49 therefore i will give thanks to you among the nations,

The Biggest Transition in the History of IT - . adam hickson channel development manager autonomy. autonomy, an hp