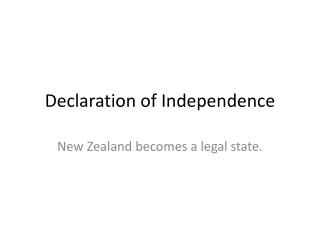 Declaration of Independence. New Zealand becomes a legal state. United Nation Declaration on the Rights of Indigenous People, 2010. “the most significant day for Maori rights since the signing of the Treaty of Waitangi.” . All Good?.

Fostering Independence With The Daily Five Independence May 2010 - This presentation addresses the structures,

Independence Movements In Asia and Africa - . document-based question:. evaluate the methods and roles of leaders and

Latin American Independence - Why did the creoles lead the fight?. latin american independence. to remember when writing

Cultural Landscape of the United States and Canada - U. s. capitol building in washington, dc capital building in