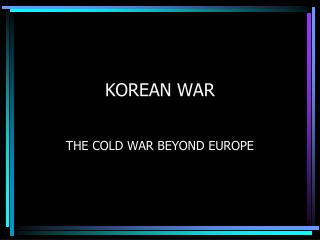 The Korean War - Tensions. during the 1940's, political tensions were building in koreajapan had ruled korea from

The Korean War - Overview/background:. the korean war was the time when the cold war became a global conflict. in 1945,

Korean War - . class info. historical investigation final copy with a cover sheet is due march 10 th /11 th those who

Korean War ! - . by: chelsea d johnson. what were the causes of this war ?. after the war between china and japan,

Korean War - . warm up. what is the united nations? what was the truman doctrine? based on the map, who dominated the war

Korean War - May 30. korean war. i. korea in wwii. korea had been occupied by japan since 1910 ussr came in at the end of

Korean War - . overview. context…. wwii ended in 1945 we had been occupying japan and helping them rebuild the un was

Korean War - The worst war for korean people. korean war. before it began. after the korean independence in august 15 th

The Korean war - . civil war and revolution in china. beginning as early as 1920, communist powers had tried to take