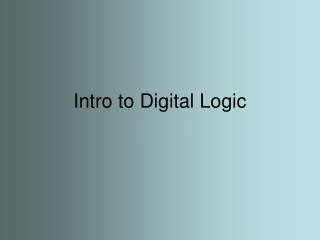 Intro to Digital Logic. What does “Digital” mean?. A method of storing, processing and transmitting information through the use of distinct electronic or optical pulses that typically represent the binary digits 0 and 1. This is typically represented by transistors switched “on” or “off” Intro to Digital Logic - . binary number system. binary is a number system much like decimal decimal is a base 10 number

Intro to Logic - . gle 0701.5.5 explore the concept of premises, including false premises. validity. what is logic?.

Intro to Logic - . dr shlomo hershkop march 23 2010. logical reasoning. how do we know what we know ? knowledge

Transistors as Digital Switches: Intro to Logic Gates - . circuits that really count. my sound’s laid down by the

INTRO LOGIC - . translations in pl 3. day 17. review of day 1 and day 2. existential quantifier. someone. is happy. there

INTRO LOGIC - . derivations in sl 2. day 10. review. we demonstrate (show) that an argument is valid by deriving (

INTRO LOGIC - . day 09. unit 2 derivations in sentential logic. basic idea. we start with a few argument forms, which we