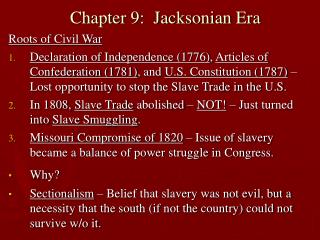 Chapter 9: Jacksonian Era. Roots of Civil War Declaration of Independence (1776) , Articles of Confederation (1781) , and U.S. Constitution (1787) –Lost opportunity to stop the Slave Trade in the U.S. In 1808, Slave Trade abolished – NOT! – Just turned into Slave Smuggling .