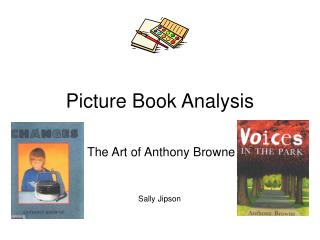 Picture Book Analysis. The Art of Anthony Browne. Sally Jipson. Some thoughts from Uri Shulevitz from his book: Writing With Pictures: How to Write and Illustrate Children’s Books. “The main functions of illustrations is to illuminate text, to throw light on words…” Visual Analysis of a Picture Book - . with illustrations from the way i feel by janan cain and the christmas miracle of

Alphabet Picture Book - Each picture was created during class in under 30 minutes after discussing picture books, and

Alphabet Picture Book - Each picture was created during class in under 30 minutes after discussing picture books, and

A Geometry Picture book - . by matthew w. a square it is windows on a building i found it at www.pbs.org/teachersource

picture book for children - Picture storybook. a picture book in which both illustrations and text are equally

The Odyssey Picture Book - . a guide to one of the most famous stories ever told. created by ms. haden &amp; ms.

Best Picture Book for Toddlers - Toddlers are high in cognitive learning, they learn from the action of others. these