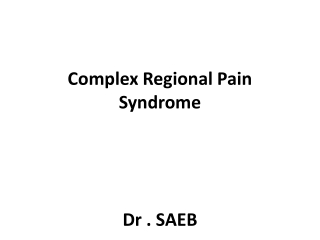 Complex Regional Pain Syndrome Dr . SAEB. Case. 53 yo male w/ complaints of severe LLE pain Pain has been present for “ a few years ” , but the severity has increased significantly over the previous 8 months Described as sharp and burning , with areas of numbness and tingling

CHRONIC PAIN SYNDROME - . chronic pain. chronic pain define as: pain persists beyond either the course of an acute

POSTURAL PAIN SYNDROME - . definition. postural pain syndrome is pain that develops in the cervical, thoracic or the