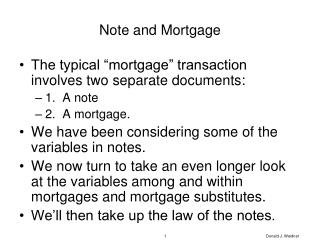 Note and Mortgage. The typical “mortgage” transaction involves two separate documents: 1. A note 2. A mortgage. We have been considering some of the variables in notes. We now turn to take an even longer look at the variables among and within mortgages and mortgage substitutes.

Note taking and note making - . by the end of this session, you should:. be aware of how to take notes in lectures

Mortgage loans and mortgage-backed securities - . mortgages. a mortgage loan is a loan secured by the collateral of some

Mortgage And Remortgage - Debt that is presumed for any purpose, however funded through a home loan, is likewise

Note and Notice - . aha moment. aha moments. your own mysteries/suspense math – when you finally figure how to solve

Note and Notice - . contrasts and contradictions. introduction. how does an author show us how a character is changing?

Mortgage Broker And Second Mortgage in Toronto - 1. questions to ask when hiring a mortgage broker 2. some drawbacks of

Our Mortgage Options - Home loan and mortgage solutions - At our mortgage options, we find the perfect loan for your

Note - . please watch this as a slide show as i took time to add some animations. . animal behavior (camouflage) . by:

Note - Looking into the crystal ball of networking: future directions and visions for networking research icnp 2003