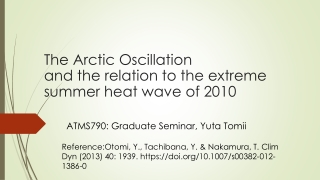 Thinking about the Arctic Oscillation - . richard b. rood university of michigan for the national park service august 8,

The role of resonant wave interactions in the evolution of extreme wave events - . r. gibson and c. swan imperial

How to Beat the Heat of Summer at the Beach - Ready to hit the beach this summer, but want to beat the heat? read more to

Preparing For The Summer Heat - With spring ending in a month or two, temperatures will start going up and everyone will

BEAT THE HEAT THIS SUMMER

Summer Holiday Destinations to Beat the Heat - April is here. five seconds of spring flew by swiftly and now the long

On the predictability of the extreme summer 2003 over Europe - . antje weisheimer ecmwf and oxford university francisco

EXTREME HEAT - . a prevention guide to promote your personal health and safety. u.s. department of health and human

The Northwest and the Arctic - . chapter 2, lesson 5. a region of plenty. many native american groups lived in this

The Northwest and the Arctic - . describe how the people of the pacific northwest adapted to their environment and used

THE ARCTIC - . by zada stueber. location. the arctic is located at the top of the