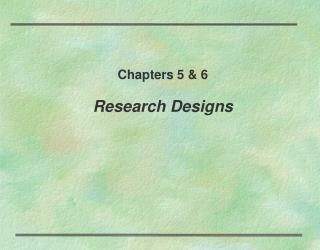 Research Designs: the Good, the Bad, and the Ugly - Overview. introductionbasic termssteps to conducting sotl

Not All Students Need to be Assessed: Research Designs Where Data are Intentionally Missing - . james a. bovaird, phd

Chapters 22 and Following - . john keyser. remainder of the course. there are six chapters left, and only two lectures.