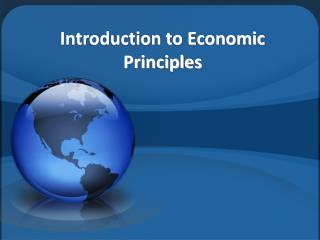 Introduction to Economic Principles. What is Economics?. The study of the production, distribution and consumption of wealth in human society Consists of 2 categories: Microeconomics The study of economics at the level of individual consumers, groups of consumers, or firms 2. Macroeconomics Answering the Three Economic Questions - . what key economic questions must every society answer? what basic economic

Sensing the World: Some Basic Principles - . introduction. sensation perception are one continuous process.

Farm Management - . chapter 7,8,9 review of economic principles . economic concepts. you should have seen most of these

7 Principles of Economics - . mr. petersen 8 th grade economics. preview. respond to each question. if you could choose

An Introduction to Agricultural Economics - . introduction. a study of economic principles, with emphasis on their