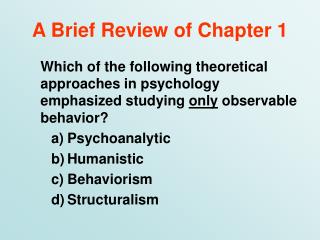 A Brief Review of Chapter 1

A Brief Review of Chapter 1

Review of Chapter 1 - . what is the difference between interpersonal and intrapersonal communication? give me an example

Chapter 1 - . financial management. learning objectives. describe the cycle of money, the participants in the cycle, and

Chapter 1 Review - . lesson 1. e. a. name all planes in the figure name 3 collinear points. explain how you know they are

Chapter 1 Review - . 2013. precision and accuracy. how do these terms in science differ from their everyday meanings?.

The Cay Chapters 1 and 2 - . answer the following questions in open ended response format. remember, answer must have a

Chapter 1-4 review - . the world state is… community, identity, stability… who is… and why are they important?

Chapter 9 Review - . communication and conflict. conflict and communication. what is an example of an image conflict?

Chapter 11Test Review - . meiosis and sexual reproduction. of the following organisms, which is haploid (one set of

Chapter 1, Section 2 - . foundations of civilization. review. we have briefly traced the development of humans from

Review Chapter 1 - . choose one of the questions below and write it in your journal. write a short paragraph to explain

Chapter 5 Review - . penelope. (3 x + 1) o. jacob, penelope, and taryn are friends that live close to one another. which