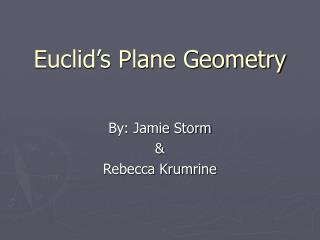 The History of Geometric Construction - . by: morgan hungerford. geometry’s beginning. geometry is believed to have

Geometry - . concerned with questions of shape, size, relative position of figures, and the properties of space. geometry

More on single-view geometry - . action of projective camera on planes. choose the world coordinate frome so that x-y

Lab 3: Earth Sun-Geometry - . earth-sun geometry. earth’s axis is tilted 23½ ° (from the perpendicular to the plane

Albert Einstein/Euclid - . by megan ng. questions. what two other names was euclid known as? how can math helps to

THE DAY THE MATH WORLD STOOD STILL - . or euclid saves pythagoras. how did euclid prove the pythagorean theorem. in

Euclid: A legend in mathematics - . &quot;hitch your wagon to a star.&quot; --ralph waldo emerson. the father of

Geometry - . sol 3.18. by ms. weinberg. let’s learn a bit about geometry! geometry is a part of math that focuses on

Ch 7 Learning Goal: PLANE GEOMETRY - . learn to describe the figures by using the terms of geometry (7-1) learn to name,