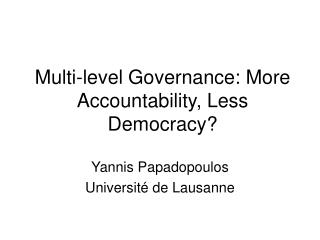 Fundamental elements of internal control - 2. reputation promise/mission. the auditor-general has a constitutional

Accountability in action John Coutts, Governance Advisor, FTN - . what we will cover. context: the 2012 act, the board

Accountability within Governance Networks - . christopher koliba university of vermont. accountability may be understood

The Jobs Strategy in Edinburgh - doing it our way, - While working with multi-level government and mixed messages about