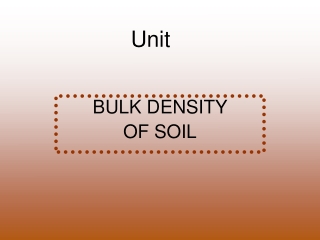 Control Unit CPU Logic Unit Arithmetic Unit - . how these components talk to each other? control lines and instruction

Unit Presentation – Speak Unit - . gionni skupaka. the book. speak is a book about a young girl, melinda sordino , who

Unit 3 Unit 4 - A1. unit 3 unit 4. present perfect simple. past, completed action with a result in present i have already

UNIT - . surface processes. 8. the action of glaciers. biology and geology 3. secondary education. unit. as it

A New Standard for the Establishment of Grass from Seed - . pennmulch is made from recycled newsprint and superabsorbent