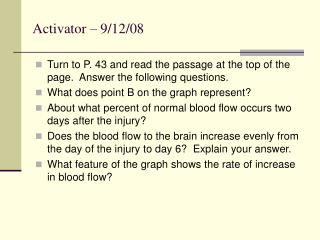 Activator – 9/12/08. Turn to P. 43 and read the passage at the top of the page. Answer the following questions. What does point B on the graph represent? About what percent of normal blood flow occurs two days after the injury?

Daily Ten #1 - Shirts and Shoes - . identify the country of origin for your shirts and shoes. activator chapter 17 –

Standard: SPS5a - Molecular Motion - . activator. eq: how is molecular motion is based on temperature?. activator: :

COAGULATION &amp; ANTICOAGULATION - . dr rakesh jain. coagulation. a set of reactions in which blood is transformed

Who would know more about dealing with a MASTERy than Jeannie? - . today’s feature writing mastery objectives. let’s

SCIENTIFIC METHOD - . a way to solve a problem . day 1. write in your agenda: i can ask questions and form hypotheses

11 th Grade United States History - . mr. weber room 217. activator: discuss in pairs then write. 1. what does it mean to

Start of WORLD WAR I - . activator: answer yesterday’s eqs. how did nationalism, imperialism, militarism, and the

Activator - . watch grammar rock “rufus xavier sarsaparilla” quick! list as many pronouns as you can as the video

APUSH - . mr. weber. activator . 1. what do you think of our textbook? how much did you read? what did you like? what did

Digestive System - . links 1. all the way through animation