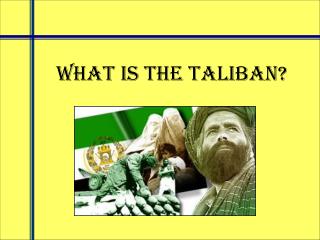 What is the Taliban?. The Taliban are the group that govern Afghanistan. They say their aim is “to set up the world’s most pure Islamic state, banning frivolities like television, music, and cinema.”. The court-martial of Bowe Bergdahl - Bowe bergdahl, who spent five years as a taliban prisoner after walking away from

The Taliban - . by: taylor boger. where did they come from and how were they formed?. the taliban’s flag . the

TO THE TALIBAN &amp; IRAQ - . i’m coming for you and i’m bringing my friends. and they’re bringing their

Music and Censorship - . how music effects people’s lives. why is music ever banned?. the taliban banned music – as

Social Injustice The Taliban - . by: jacob mermelstein. what is the social injustice?. the taliban taking over

Triage Scenarios - . gary davis md. scenario. the province of itiah is under attack by taliban forces. ansf soldiers have

Afghanistan - . directly after 9/11 the taliban control 90% of afghanistan refuse to hand over bin laden or expel

Part 2: Canada in Afghanistan – What Should Our Role Be? - . who are our troops struggling against in our efforts to

Part 2: Canada in Afghanistan – What Should Our Role Be? - . who are our troops struggling against in our efforts to

Holy Oil &amp; Water: The Economics of a Theocratic Nation - . presented by: johanna murphy. “the troubles” in

Afghanistan II - . the taliban and september 11. where we left off. in 1989 the soviets finally left afghanistan, but the

The U.S. Invasion - . by: hayden mcdonnell. why are our u.s. soldiers in afghanistan. the main reason our soldiers of the