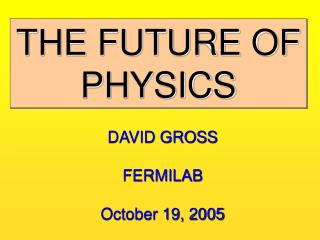 THE FUTURE OF PHYSICS. DAVID GROSS FERMILAB October 19, 2005. & The 2004 Nobel Prize in Physics. On October 7, 2004 the KITP celebrated:. 25 years of the Institute for Theoretical Physics. The inauguration of the new wing of the KITP. The “ Future of Physics ” conference. The Future of Particle Physics - . steve king, university of southampton, masterclass, 24th march, 2009. you are here.

The Future of Heavy Ion Physics - . jamie nagle, university of colorado at boulder. what have we learned

Neutrino physics : The future - . gabriela barenboim tau 04. we know that neutrinos are massive and oscillate !. evidence

The Future of Hadronic Physics in the US - . introduction rhic-spin jlab at 12 gev electron-ion collider other issues

Future Faces of Physics Physpardy! - . physpardy!. know your stats. light up my life. past faces of physics. extreme

The Future of Fundamental Physics Research at NASA - . from quantum to cosmos: fundamental physics research in space

Status and Future of n -physics - . what do i talk about?. motivations oscillations status open questions near future not