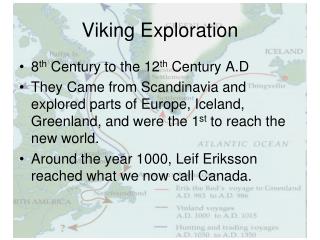 Viking Exploration. 8 th Century to the 12 th Century A.D They Came from Scandinavia and explored parts of Europe, Iceland, Greenland, and were the 1 st to reach the new world. Around the year 1000, Leif Eriksson reached what we now call Canada. .