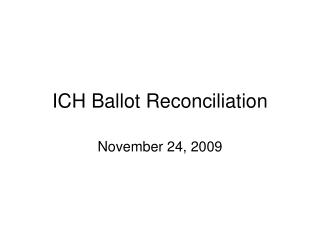 The Spaciousness of Reconciliation - “ the quickest way to reach the sun and the light of day is not to run west,

Ballot Initiatives - . ccsc constitutional review. a ballot initiative is a policy proposal decided by plebiscite once a

Reconciliation - . reconciliation. definition – the process of understanding and restoring a relationship, especially

Bank Reconciliation - . 1. introduction. bank reconciliation statement is a report which compares the bank balance as per